1. The Greek alphabet is as follows:

* This column has been added to the original material.

2. The student is advised to learn the small letters thoroughly, in connection with the first lesson, leaving the capital letters to be picked up later, as they occur. It should be observed that sentences are begun with small letters, not with capitals. Before the formation of the letters is practiced, guidance should be obtained from the teacher, since it is impracticable to copy exactly the printed form of the letters, and since bad habits of penmanship ought by all means to be avoided. For example, β and ρ should be formed without lifting the pen and by beginning at the bottom. In these matters the help of a teacher is indispensable. 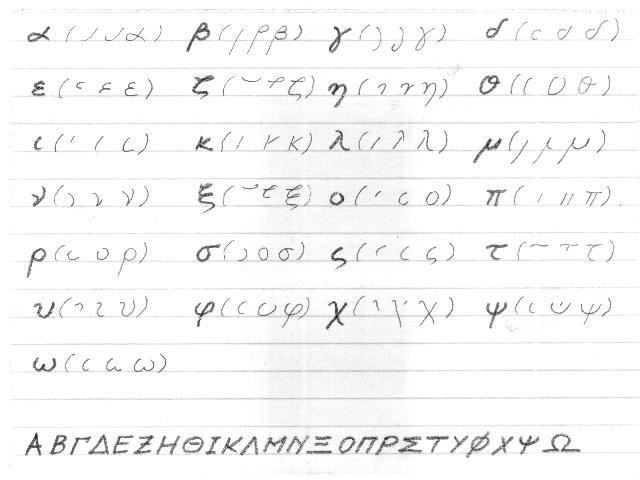 3. The Greek vowels are as follows:

It will be noted that α, ι, and υ can be either long or short. The long α and υ are pronounced very much like the corresponding short letters, except that the sound is held longer; the short ι is pronounced like i in pit and the long ι like ee in feet.

ι and υ are called close vowels; and the others open vowels.

4. A diphthong is a combination of two vowels in a single syllable. The second letter of a diphthong is always a close vowel. The first letter is always an open vowel except in the case of υι. The common diphthongs are as follows:

The diphthongs ηυ and ωυ (pronounced by drawing the sounds of each letter closely together) are rare. When ι unites with long α, η or ω to form one sound, the ι is written under the other letter instead of after it, and is called iota subscript. Thus ᾳ, ῃ, ῳ. This iota subscript has no effect whatever upon the pronunciation; ᾳ being pronounced like long α, ῃ like η, ῳ like ω.

5. A vowel or diphthong at the beginning of a word always has a breathing. The breathing stands over a vowel; and in the case of a diphthong it stands over the second of the two component vowels.

6. There are three accents, the acute ( ´ ), the circumflex ( ῀ ), and the grave ( ` ). These accents, like the breathings, stand over a vowel, and, in the case of a diphthong, over the second of the two component vowels. When a breathing and an accent stand over the same vowel, the breathing comes first, except in the case of the circumflex accent, which stands over the breathing. Thus οἴκου, οἶκος. The use of the accents will be studied in Lesson 2. Here it should simply be observed that the stress in pronunciation is to be placed on the syllable that has any one of the accents.

There are four marks of punctuation: the comma (,) and the period (.), both written on the line and corresponding to the comma and the period in English; the colon, which is a dot above the line (·), and takes the place of the English colon and semicolon; and the question-mark (;) which looks like an English semicolon.

After learning to write the small letters of the alphabet and give the names of the letters in order, the student should practice pronouncing Greek words and sentences found anywhere in the book. Throughout the entire study, great care should be devoted to pronunciation, and the Greek sentences should always be read aloud both in the preparation of the lessons and in the work of the classroom. In this way the language will be learned not only by the eye, but also by the ear, and will be fixed much more firmly in the memory. The student should try to read the Greek sentences with expression, thinking of the meaning as he reads.